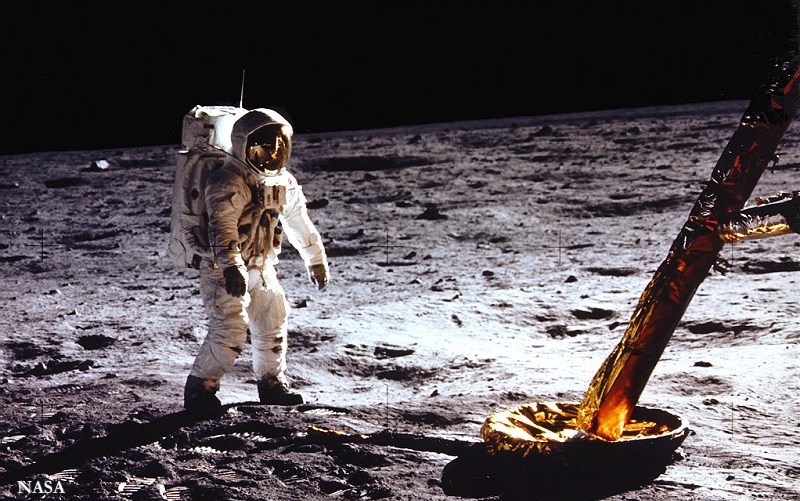 This week will mark 50 years since Apollo 11 and humanity first stepping foot on another world! I have been a space-geek since I can remember, and as a kid I read or watched anything I could about the Space Race. So I’m really excited to celebrate and reflect on #Apollo50th!

Last week I had the thought: I wonder if anybody will be live-tweeting the Apollo 11 mission in real time? Thanks to some Twitter-friends, I found a couple accounts doing similar things, but nobody had built a “bot” specifically for this purpose. Since I built @Mock_Twain a few years back, I thought this was something I could do!

as it tweets out the entire transmission log in real time!

The Apollo program had a huge public-outreach presence, from wall-to-wall TV and Radio coverage, to interviews from space. People love experiencing the epic journey in real-time. HAM radio operators were even able to “eavesdrop” on NASA. Thus, it’s not surprising that NASA still makes the transmission logs for Apollo 11 readily available for all to see. They’re a fascinating historical document, and I’d encourage anybody to scroll through them!

It took a few hours of cleaning and catching OCR bugs, but I was able to parse and get timestamps for 8462 individual transmissions, starting 4 seconds into launch, and ending with Splashdown!

Here is the distribution of transmissions to/from Apollo 11 over the entire mission, as presented in these logs:

The crew definitely sleeps, and you can see a few big milestones of the mission standing out. Most notably the spike in communication around the lunar landing (approximately 4.25 days into the mission). Its also interesting (to me, at least) that the talked more on the way to the moon than on the way home… kinda like most road trips i’ve been on, you just want to be quiet and get home on the way back.

The logs contain over 118k words - some of them more famous than others (think: “One Small Step”, etc), but arguably every word is an important part of this history. As this is a time-tagged archive of words, they literally tell the story of what the crew and NASA were discussing over time. So, borrowing from some recent analysis I did of TV scripts, here are a couple looks at specific word use over the mission:

Operationally, the Apollo missions had several key “burns” (aka firing of various engines) to get to the Moon - and most critically to get off it and back home. These are neatly outlined in the word-occurrence chart: 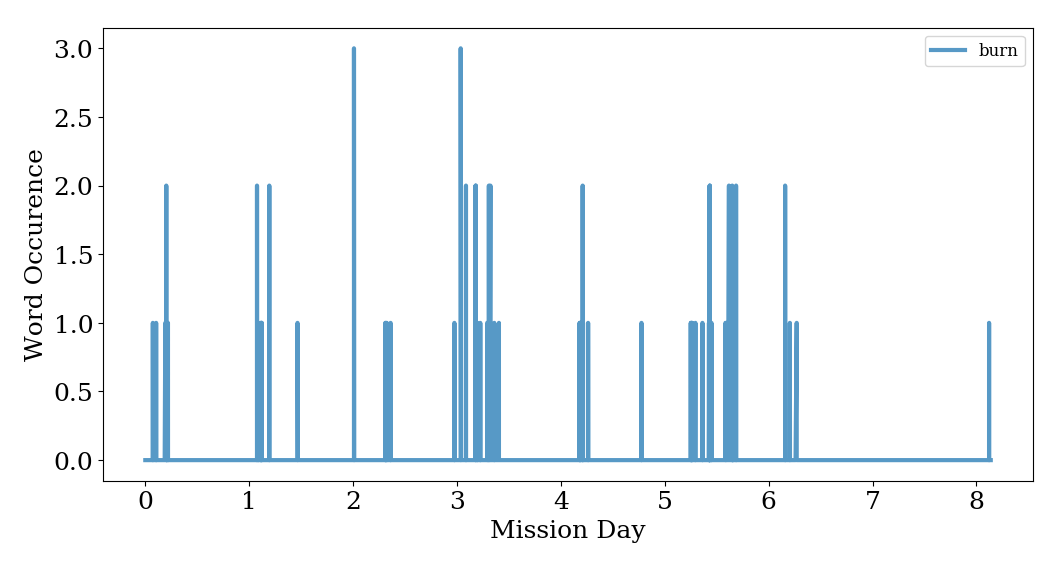 Here we see the use of the words “earth” and “moon”, as well as the name for their temporary lunar base “tranquility”, over time. Naturally “tranquility” only shows up while they’re on the Moon. I’m struck by the fact they’re still talking about the Moon even in the last day of the mission, when the focus was entirely on reentry and landing. 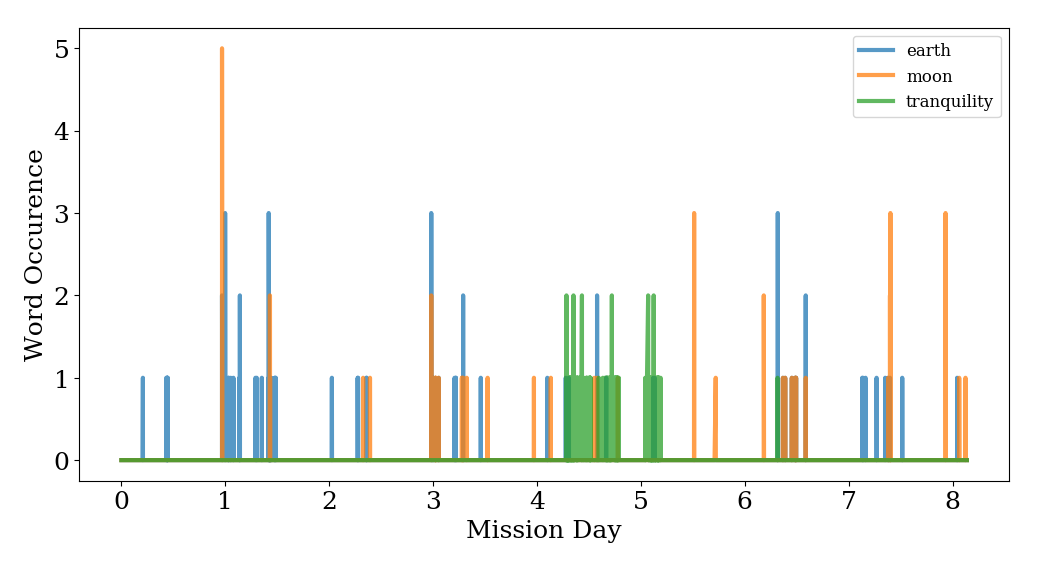 05:03:07:52 - “Eagle and Columbia, this is the backup crew. Our congratulations for yesterday’s performance, and our prayers are with you for the rendezvous. Over.”

This next chart fascinates me: the word “happy” versus “congrat” (i.e. congrats or congratulations) over time. Happy is used a few times, as milestones are met, and transmissions to the public are made. But congratulations are used sparingly, it seems! If my read of this data is correct, nobody says congratulations until a day after they land on the Moon! 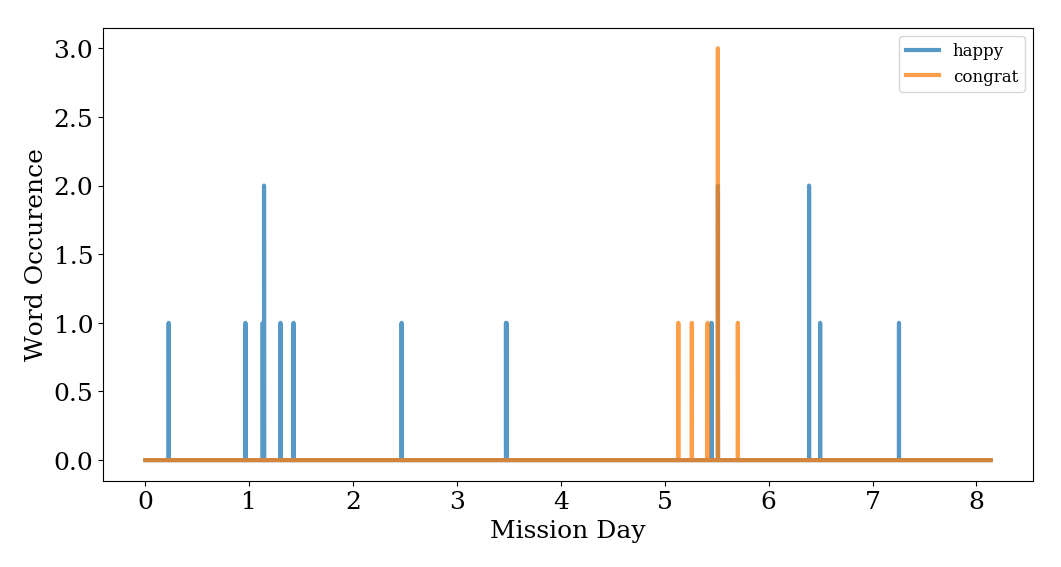 NASA is famous for its frequent use of acronyms. Here for example is a staggering list of over 9000 NASA acronyms compiled by the Kennedy Space Center…

You can clearly see evidence of acronyms and short-hand speaking in the data. The communications used with Apollo were (mostly) 2-way radio, including interference at times, and needing to relay very specific time-critical information. As such, the vast majority of transmissions were very short, only a few words long: 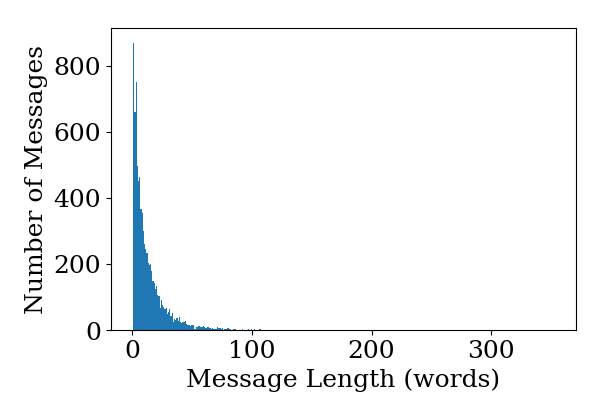 In fact, the cumulative distribution below shows that fully 50% of the transmissions were shorter than 25 words! And that includes “sentences” like these: 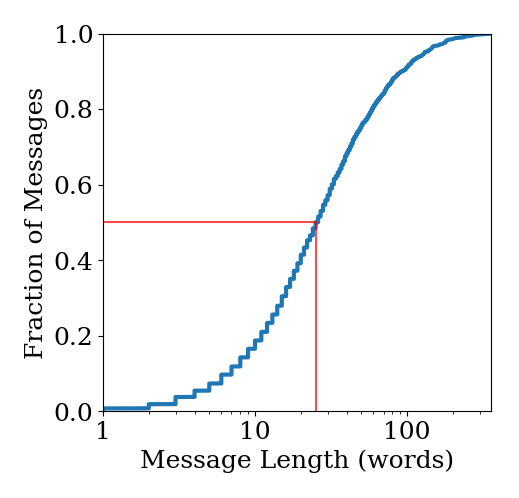 The Speed of Light

Even with a giant rocket, the Moon is a long ways away. Indeed, it takes light (and therefore radio transmissions) more than a second to travel there from the Earth!

I wondered if we could see this light travel time in our transmission log data? Now, the logs are reported with timestamps down to the second, and I’d assume they’re accurate to within a second on average… If we assume that the response time of NASA and the crew to transmissions is approximately the same, then the time between subsequent messages should reflect this light travel time.

In other words, messages should be spaced out more by a second or two when at the Moon, as compared to being near Earth.

Here I’ve made a 75-point running average of the time between messages for the entire mission log (blue dots), and done a simple quadratic fit (red line). I wouldn’t base my stats cred on this, but just for fun it looks like you can see a delayed reply time during the middle of the mission, and the amplitude is ~0.9 seconds. Not bad! That’s pretty close to the ~1.2 seconds you expect for the Earth-Moon separation. Neat!

I did play with the averaging and the polynomial fitting, and the result is surprisingly robust…

Of course, the code to make the figures shown here, as well as parse the (cleaned) Apollo 11 logs - and to run the Twitter bot - are all available on GitHub!

Or checkout the timeline below:

These links support this site

You may also enjoy...